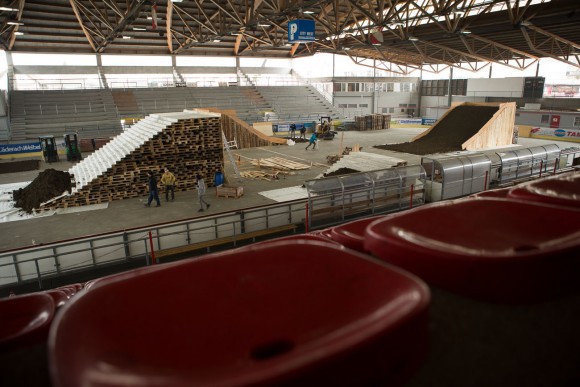 Things have been changing during the last week for the ice rink in Thun. Where there used to be ice hockey players turning rounds and ice princesses practicing their spins, all is currently turning around biking, slopestyle mountain biking to be more precise. Only a few days are left until the Swatch Rocket Air 2013 is going to take place. The preparations are running at full speed, over 100 helpers are using more than 2000 Euro pallets to build the set. The set up for the two-day event will take a total of ten days. Alongside to the bike contest, a FMB Silver event, many other attractions are offered. With "Swatch Rapid Fire" a world premiere is taking place since it is the first team contest to be realized within the FMB world tour.

First slopestyle team contest
For the first time in the history of the FMB world tour a slopestyle team event is realized, the Swatch Rapid Fire. Up to seven teams are competing during the event. The teams will get the chance to make creative use out of the parcours and to create their own choreography. The teams are built based on nationality or geographic origin of the riders. Therefore one may look forward to battles like Team Scandinavia vs. Team France or Team Switzerland vs. Team Canada. The Swatch Rapid Fire is all about thrilling the crowd with the so called Rapid Fires. When doing a Rapid Fire the riders will ride through the track successively. This does not only look spectacular but is also not without danger for the riders. Accidents need to be prevented with regard to the successive rider. Judges will choose the two most inspiring teams. Within the superfinal these two teams will compete in one last run. The winner of the superfinal is going to be chosen by the spectators by means of applause. Additionally, the best trick of the Swatch Rapid Fire team battle is going to be rewarded with 1000.- CHF. A breathtaking show can be expected due to the Fuel Girls, a fire-spitting showgroup from the UK, which will heat up the crowd.

Livestream on Red Bull TV and SSF
As already announced, there will be a live broadcast of the contest on Saturday as of 8 pm. The stream will be aired on the Bike Sport Channel on Red Bull TV. This provides the Swatch Rocket Air with a worldwide audience but of course brings along some organisational challenges. In order to satisfy the Swiss audience, there will be a full-length broadcast of the contest on SSF, Schweizer Sport Fernsehen, on Tuesday 16th of April as of 8 pm.

Side-Events: Shows and Activities to complete the contest
Alongside the Swatch Rapid Fire on Friday and the contest on Saturday several side-events complete the bike happening inside and outside the ice rink of Thun. Once again, the Flatland show will be a special highlight. On Friday and Saturday professional Flatland BMX riders will compete. For the first time the young French rider Matthias Dandois will take part in the contest. The Red Bull rider's unique style combines Flatland BMX with street elements. Furthermore, the Parkourshow is going to celebrate its premiere on the Swatch Rocket Air 2013. In addition to the exciting shows the Swatch Rocket Air offers a fringe programme for children and the whole family. Alongside the Kids Parcours and the Active Zone, this year there will be the premiere of the Nipper Race for 2-5 year olds on Saturday. The kids will compete playfully with juvenile bicycles. To ensure reasonable charges for families, so called family packages are offered. Two adults with children only pay 35 CHF entry fee. Children under 12 years do not have to pay any entry fee.

The Swatch Rocket Air is a wild show. The possibility of accidents is part of the sport. Nevertheless it is our wish to live up to the responsibility and to assure our support for the riders in the case of an accident. Therefore, the Flying Metal Crew decided to donate 1 CHF per adult person to the Wings for Life foundation. The foundation supports paraplegic people and uses donations to finance promising research projects to cure spinal cord injuries.