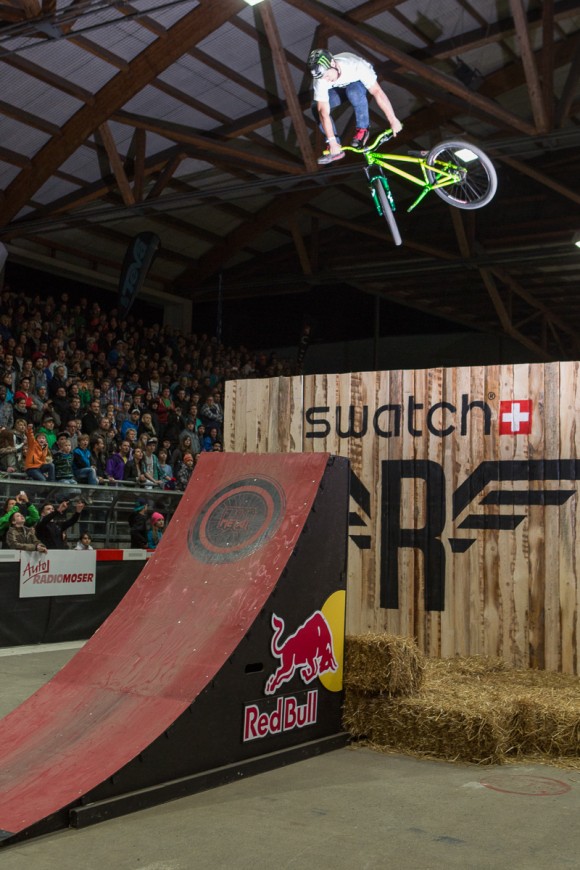 Explosive event showdown at the Swatch Rocket Air in Thun, Switzerland. On Saturday the top-classed international riders were fighting for precious points on the Freeride Mountain Bike Worldtour (FMB) and a prize money over CHF 10’000. This year’s winner is Sam Pilgrim from Great Britain. With his huge superflip over the big air, a 540 on the step-up and a 720 on the corner he impressed the judges and reached the highest score. Martin Söderström, Sweden, took the second place, followed by Brett Rheeder, Canada. Numerous side events completed Switzerland’s biggest dirtjump contest.

Exciting contest final
Breathtaking atmosphere in the arena in Thun, Switzerland. 8’500 spectators urged the international riders to their limits. They presented some incredible tricks on the newly designed course. This year’s winner is Sam Pilgrim from Great Britain. He convinced the judges with a technical very demanding line and brought out amazing tricks such as a flip no-hander, followed by a huge superflip on the superkicker, an unbelievable 540 on the step-up and a 720 on the corner. Therefore he got precious points for the FMB Worldtour and juicy prize money. Martin Söderström from Sweden got second and also impressed the crowd with his incredible triple tailwhip. On third place is Brett Rheeder, Canada. He showed a very clean truckdriver and flip barspin.

Record breaking edition of the Swatch Rocket Air
This year’s edition of the Swatch Rocket Air beat all expectations. The organizer and sponsors are looking back to a successful event. A lot of innovations attracted even more spectators on the event area.
The organizer observed curiously the development of the live stream, which was offered for the first time this year. 8’500 spectators worldwide watched the contest live.
Numerous side events such as the flatland show with the French Redbull Rider Matthias Dandois amazed the crowd and completed the biggest Swiss dirtjump contest.
Jérome Hunziker, organizer and president of the Flying Metal Crew, drew a positive balance after the last rider finished his run. “More than 200 volunteers made this event possible. All their hard work leads this event to such a success.”

What brings the future?
Even though the event is growing with international sponsors and increasing number of spectators Hunziker highlights the regional roots of the event. “This year we expanded the reach thanks to livestream and Swatch as sponsor. Nevertheless most of the spectators and all the volunteers are from Thun.” So the question is: how will the Swatch Rocket Air continue?
Course builder and 25th placed in this year’s contest, Ramon Hunziker, sees according to the course building still a lot of potential. “Year after year we have managed to create a more spectacular course. We never run out of ideas but it is all a question of how much time and effort you can put into it.”
We will see what awaits us at next year’s Swatch Rocket Air.