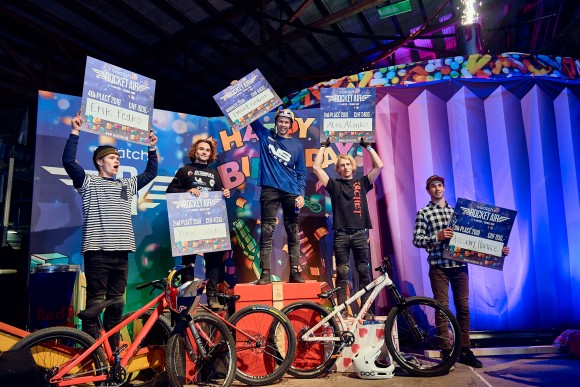 Dawid Godziek takes home the cake, winning the 10th edition of the Swatch Rocket Air! The BMX turned slopestyle rider gave the crowd a spectacular run scoring 94.3 at the Gold FMB event. Even with snow falling on the castle behind the transformed ice rink, riders and spectators alike came ready to party! And party they did!

While Godziek may be leaving with the title, it was the run of Lucas Huppert that the crowd won’t soon forget. The 2018 Red Bull Rookie of the Year brought the arena to a roar with an impressive first run landing him in 8th. A crash on his second run brought his chances of the podium to a premature close but that did stop the audience from giving the young Swiss gun a standing ovation.

It was clear the volunteers, organizers, riders, and audience came ready for the bash! The birthday themed course complete with a swing set, remote control car, cake, and giant confetti bomb gave the audience a colorful backdrop for the rider’s full gas runs.

From young to old, beginner to professional the visitors can be grateful for the hard work of the Flying Metal Crew and volunteers. All details the available online at www.rocketair.ch. Fans can subscribe to the crew newsfeed and @swatchrocketair on Instagram, Facebook and Youtube to stay up to date.