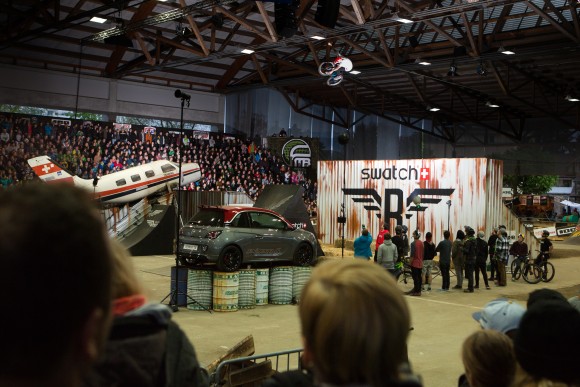 This year, the mountain bike slopestyle elite is going for a wild ride through the jungle in Thun. On the 29 th and 30 th of April, the annual Swatch Rocket Air will showcase top-notch mountain biking. As the first and only Gold Event of the FMB World Tour in Switzerland, the Swatch Rocket Air brings mountain bike celebrities from all over the World to the picturesque Thun.

This year's theme, “Welcome to the Jungle” will line up veterans as well as new faces at the Swatch Rocket Air. Amongst others, BMX-Superstar, Drew Bezanson has signed up for the contest. The 26-year- old from Canada has been on the podium of nearly every BMX contest on the globe. In 2016, he wants to attend the FMB World Tour and make the switch to mountain biking. One step ahead of him is BMX legend, Ryan Nyquist. The smiley California local already took part in a few mountain bike contests last year and will keep with the pace in Thun. The crowd puller on Friday will be the Team Battle, in which Team “BMX goes MTB” will challenge last year’s winner Team “Catalunya.”

Two more familiar faces in the world of mountain biking are the Belgian, Thomas Genon who won the Swatch Rocket Air in 2014 and 2015, and the American, Nicholi Rogatkin. After a second place last year and a silver medal at the first FMB Diamond event this year, he will pressure his competitors with tricks like the 1080, a triple rotation of the body’s axis.

In addition to the slopestyle contest, there will be several other highlights this year. Everyone will be able to get involved with the Pump Battle Series and prove their skills on the Modular Pumptrack. Thanks to electronic timing, all riders can take part in the online ranking system and compare their times with competitors from all over the world. The kiddies can start at the Like-a-Bike race and discover their talent on two wheels. For anyone not riding a bike can also be sure they’ll get their money's worth as a spectator. The Flatland BMX Show completes the All About Two Wheels schedule.

New this year will be online ticket presales. In addition to tickets available on location Friday and Saturday, tickets will also be available prior to the event on rocketair.ch/tickets.