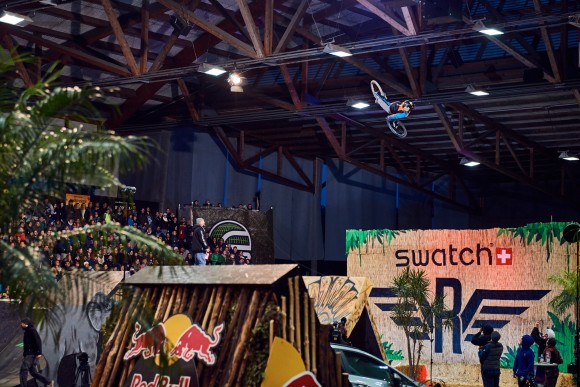 What an end to the 7th annual Swatch Rocket Air. After the Teambattle on Friday, the riders had to fight for FMB world tour points in the final. The winner of the Swatch Rocket Air 2016 was American, Nicholi Rogatkin. Many exciting side events completed the show and made it to a spectacular adventure into the jungle of Thun in front of 10’000 spectators.

Rogatkin Wins Final The atmosphere at the ice rink of Thun was ecstatic. In a sold out arena, riders brought their best tricks and impressed the audience with spectacular runs. The winner of the final was last years second place, Nicholi Rogatkin. His first run featured difficult tricks such as a cork 720 and a triple tailwhip, topped off with a lot of his own unique style. With this remarkable run, Rogatkin convinced the judges and brought the audience to their feet. Although Rogatkin’s victory was set before his second run, he completed half the course and preformed his famous trick, the twister. The winner not only won mentionable price money but also critical points for the Freeride Mountain Bike World Tour (FMB). Thanks to the Swatch Rocket Air now being a Gold Event, the points will now also count towards the Diamond Series. With a super high cork 720, the Swedish rider, Max Fredriksson landed himself in second place. The Italian rider, Diego Caverzasi showed one of his best runs here at the Swatch Rocket Air and received third. A Weekend of World Champions Once again the Swatch Rocket Air was a huge success. Not deterred by the bad weather on Saturday, a record number of 10’000 people visited the Swatch Rocket Air and helped create an awesome atmosphere. When the riders weren’t hitting the big jumps inside, there was still plenty to see outside. The world champion of BMX, Viki Gomez put together a spectacular show and impressed visitors. Noël Niederberger broke the world record of the Pumptrack World Series by riding the track in 7.206 sec. It is safe to say the organizers out did themselves, adding even more to the event line up and put a smile on many faces. [sfx ...]